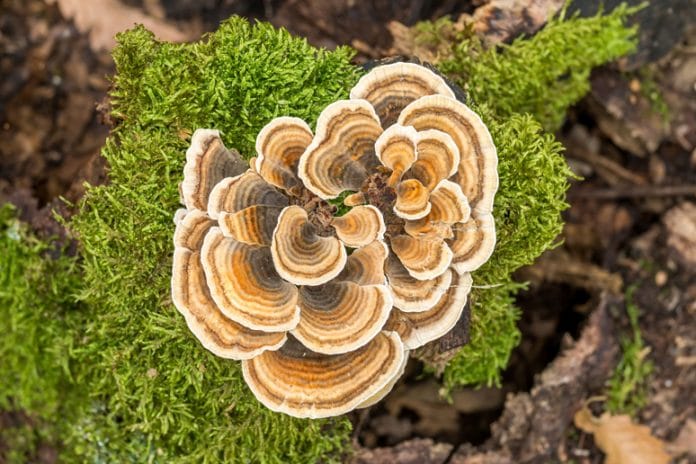 This mushroom gets its name from its appearance, which resembles the colorful tail of a turkey. Often found colonizing along decomposing wood or tree stumps in moist weather, this mushroom is not as rare as many of the others used in Traditional Chinese Medicine. Records of the mushroom in teas date back to the 1400s in China, under the Ming dynasty. Traditionally, the mushrooms would be boiled in the water to make a tea, quite unlike steeping done today. Boiling them, however, not only killed contaminants, but it also brought out qualities in the mushroom that treated many ailments by extracting the soluble polysaccharides.

Turkey Tail is one of the most researched medicinal mushrooms in the world, partially due to its easy accessibility. There are no mountains to climb or forests to search in order to find its natural habitat, and it can grow in both warm and cool climates, sometimes even in water. Its main purpose seemingly is to return nutrients to the soil when wood begins to rot, so it is easy to find in almost any area that isn’t overly dry. Simply because it is easy to find, however, doesn’t mean its effects should be disregarded.

In ancient times, it was used to boost the immune system, and as recent studies show, science has proven what the Chinese already knew. Today, it is considered a major cancer therapy in Asia, particularly in Japan.

Turkey tail is often seen growing among many microorganisms. Beetles, flies and even algae are attracted to this helpful organism, so the practice of boiling them remains a necessity unless grown under very controlled conditions.

What Turkey Tail Does

We know from scientific studies that Turkey Tail shows promising results for cancer patients, those with compromised immunity, high pain levels, and even decrease muscle wasting. There are an abundance of benefits, however, that are still being researched.

Smaller, independent studies have shown Turkey Tail to regenerate bone marrow that has been damaged, and many veterinarians use it in cases of cancer for pets, since chemotherapy is often not preferred. It is known as a strong antioxidant, preventing illnesses such as cancer. It has been shown to strengthen the immune system, increase energy, aid digestion, assist healing from liver ailments and hepatitis B. It is also used to treat urinary tract infections and respiratory issues, even reducing phlegm production in those with colds.

In 2012, something quite unexpected happened when the FDA approved a trial for Turkey Tail mushrooms in cancer patients. Thanks to this approval, Bastyr University are now better at understanding how the mushroom, often brewed in a tea, can boost the immune systems of chemotherapy patients. Research by the University found that the supplement can strengthen a patient’s immune system and thereby support existing treatments for breast cancer.

Dr. Cynthia Wenner investigated more of the effects of this supplement for the National Institute of Health. Findings confirmed that the mushrooms stimulate the immune system, even correcting deficits in patient’s immune systems without patients undergoing traditional treatments.

In 2014, the Journal of Thermal Biology concluded that not only did Turkey Tail improve the effectiveness of chemotherapy and radiation, but it also improved quality of life among patients in a variety of ways. Firstly, it reduced pain levels, decreased muscle wasting, and decreased treatment side effects, such as nausea and vomiting.

Some products released from China and surrounding areas have tested with abnormally high levels of immune-compromising metals. To avoid purchasing products like this with potential adverse effects, particularly among those with immune system issues, it is important to find a certified organic mushroom product. This will help ensure that the product purchased has not accumulated heavy metals from air or soil pollution. Because the mushroom can rapidly accumulate metals, care should be taken in this area. Keep in mind that in the United States, a product that is actually organic will have a stamp with an agency, such as “USDA organic.” Faulty marketing, particularly outside of the country, can deceptively describe a product as organic that is not truly so. The only way to avoid this is to look for an agency stamp.

If making your own tea or simply consuming the mushroom, be sure to boil Turkey Tail mushrooms, as they often grow among an abundance of microorganisms, and even attract them after the mushroom dies.

Today, one can purchase supplements in the form of teas and extracts, and one can also find Turkey Tail quite easily in health food stores. For supplements, refer to the manufacturers’ direction, as concentration may vary from one company to another. When purchasing at markets, be sure to know the country of origin and the information discussed above. The mushrooms may be boiled and chewed as a gum, or made into a tea. They also may be boiled and added to other meals, particularly sushi and fish, which may have metal content. The mushroom is beneficial with these meals because of its ability to absorb metals, and can help reduce potentially harmful effects from fish who have been exposed to metals in their environment.