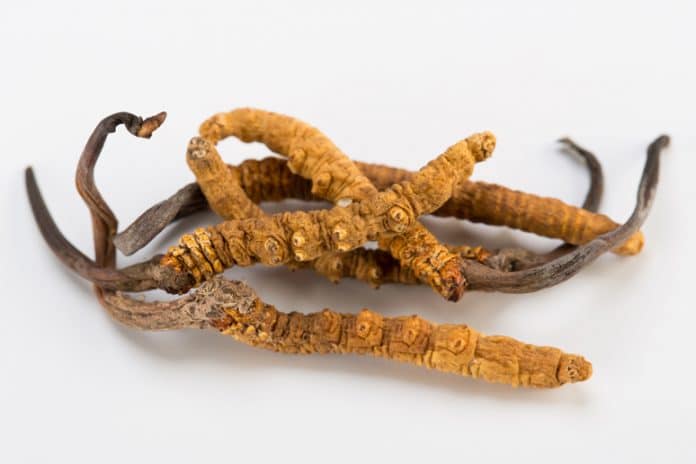 Another ancient Chinese remedy, cordyceps are thought to originate in the Himalayan Mountains of Tibet. Over 2000 years ago, herdsmen stumbled upon this strange looking mushroom with no cap. In traditional Chinese Medicine, the mushroom quickly became a cure all, being used to treat ailments of the kidneys, heart, lungs and liver. It was also used for fatigue, fertility and sexual issues, pain relief, and of course, to promote longevity. The imperial Quing dynasty used it for virtually all of these remedies, and also to promote physical and sexual energy.

It is only in the last few decades that cultivation has allowed science to study this once rare mushroom, and it is now known to have up to 600 species. Written records of its effects on ailments exist from over one thousand years ago, first appearing in the year 1082. At one point, it was considered so rare and collection was so difficult due to its preference for growing at high altitudes, that it was the most expensive raw herbal material on the globe. In fact, it wasn’t even introduced to Europe until 1726, when it was introduced for purely scientific purposes in Paris. Its natural environment was so harsh, that collection was daunting. Growing at altitudes of over 13000 feet above sea level, temperatures were below freezing, with snow over 70% of the year.

It wasn’t until 1972 that the conditions for growing cordyceps could be reliably replicated. Also, it was not until we began to research DNA that we found these mushrooms to be significantly different from those grown in the wild, tossing in another research roadblock. Today, some manufacturers and growers boast cordyceps that are almost identical to their rare and wild ancestors, and research has begun to reflect this.

While many claim that cordyceps are helpful in increasing athletic endurance, there is not sufficient evidence to substantiate this claim. It is encouraged that for this particular purpose, one should consult a physician or gradually increase supplement intake to see the personal effects.

Other ailments that have been shown to respond to cordyceps are asthma, kindey malfunction, intolerance to chemotherapy, decreased libido, hepatitis B, cough, bronchitis, ringing in the ears, decreasing fatigue, anemia, heart arrhythmias, high cholesterol and weakness. It has also been said to increase longevity, and many take it specifically for that purpose.

Ashok Kumar Panda and Kailash Chandra Swain wrote a study in 2011, published in the Journal of Ayurveda Integrative Medicine, noting that effects were initially noted by herders when their herds of goats, sheep and other animals consumed cordyceps while grazing and became much stronger and larger. Soon, locals were using it to increase milk production in cattle, as well as the cattle’s quality of life. These observations led to many practitioners to use cordyceps for a number of diseases that lead to wasting of muscle. The study found that local folk healers used the treatment for a total of 21 ailments, including bronchial asthma, bronchitis, tuberculosis, diabetes, common cold, cancer, erectile dysfunction and hepatitis, among others. The authors found a number of studies to support the positive reported effects. A lack of human study in clinically controlled environments was noted as a study limitation.

In 1999, the Annual Meeting of the American College of Sports Medicine in Seattle released findings of a double-blind placebo controlled study. Among 30 elderly volunteers, cordyceps improved the amount of oxygen the participants were able to assimilate, by a significant amount. This may explain, in part, why much success has been reported among respiratory ailments.

In addition, as early as 1995, the Journal of Administration of Traditional Chinese Medicine found improvement among pulmonary ailments. Chronic obstructive pulmonary diseases improved 40% after administration of cordyceps.

In pneumonia, effects were more pronounced and significant based on a study done in Beijing in 1985. In the Collection on the Basic Medicinal and Clinical Studies of Submerged Culture, researchers noted a 400% improvement in mortality rates among patients with pneumonia who were administered cordyceps.

As with most supplements, it is best to begin by consulting the manufacturers’ recommended dosage, as levels can vary among brands. It is recommended however, for cordyceps to be taken at a recommended dosage as high as 3 to 6 grams a day, as this dose has been used in patients with renal failure for long periods of time including several years. It is worth noting that most clinical trials using dosage of less than 4 grams did not appear to be as promising as those of higher dosages.

For those undergoing chemotherapy, the recommended dosage is 6 grams daily for approximately two months.

Should dry mouth, gastrointestinal discomfort or nausea occur, one should decrease the dosage or consult a naturopath. A lethal dose has not yet been established, and doses as high as 80 grams in mice did not cause death.