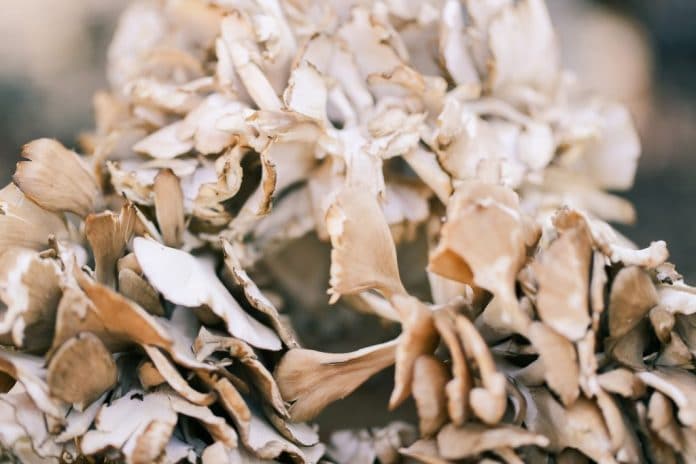 The maitake mushroom grows in clusters, most often at the base of oak trees, commonly found in North America. Its name, maitake, means dancing mushroom. It is native to Japan and North America, and is said to help assist with altered body systems, helping the body achieve and maintain homeostasis.

The mushroom was traditionally used in both Chinese and Japanese medicine. Mainly used to boost the immune system, it boasts similar qualities to many other mushrooms in Traditional Chinese Medicine, though perhaps more easily obtained. It is actually a source of amino acids, potassium, magnesium, calcium, fiber, vitamins B2 and D2 and niacin.

The maitake mushroom is one of the most commonly used mushrooms in the culinary realm, often as a major ingredient in Japanese nabemono. It is also commonly cooked simply with only butter, so it is an easy addition to almost any diet.

In Japan, this “King of Mushrooms,” can grow up to 100 pounds, and is sometimes even consumed raw.

The maitake mushroom has been shown to induce ovulation when the body does not naturally cause it to occur. It has been shown in studies to help manage diabetes, and can even interact with some medication due to its effectiveness. In addition, it has been shown to boost the immune system, and help fight and prevent cancers. It also contains antioxidants, which provide an endless number of benefits such as increase immunity, although studies are not agreeable concerning this claim. The mushroom has also been shown to help treat polycystic ovarian syndrome, particularly when there are issues with ovulation.

In 2010, The Journal of Alternative Complementary Medicine published a study on Maitake mushrooms. The study followed progress within a group of women who had polycystic ovarian syndrome. During the study, they found that patients who ingested Maitake mushroom extract ovulated in a more regular fashion, suggesting that the mushroom could induce ovulation when the body prevents it.

As early as 2001, however, the Diabetes Medicine journal published findings that suggested Maitake mushrooms had hypoglycemic effects, meaning it lowered the blood sugar of diabetic patients. The Journal of Pharmacy and Pharmacology followed up with similar findings in 2007, when they found that the fruit body of the mushroom to have antidiabetic properties as well.

In 2009, its anti-cancerous effects were published in Oncology Reports, a peer reviewed medical journal, when findings suggested that a water soluble extract had a positive effect on human gastric cancer cells. This led researchers to conclude that the Maitake mushroom had properties that could inhibit the growth of tumors.

Maitake mushroom can be added to one’s regimen in a number of ways. Extract is commonly sold in liquid form, as well as capsules. For best results, consult the manufacturer’s directions based on the concentration produced. Those wilth ailments will likely take a larger dose, although it is recommended to graduate up in order to improve tolerance and decrease the likelihood of any side effects. For those with ailments, it is recommended to begin with 35 to 75 milligrams, although this could vary greatly among suppliers. For maintaining health, a low dose of only about 15 milligrams is suggested.

For best results, consume on an empty stomach, or at least half an hour prior to a meal. As a precaution, one should consult a doctor before beginning this regimen while taking medication for diabetes, as some reactions may occur.

In addition to supplements that are available, maitake mushrooms are actually quite easy to find due to their popularity in cooking. Great with stir fries, rice, and even served plain with butter, these mushrooms are an easy way to add a healthy supplement to your regimen by just adding an extra ingredient while cooking. It can also be boiled to make a tea, or dried. Because they can often be large in size, people often freeze them, breaking off portions each time they cook a dish to which they wish to add maitake mushrooms. Though studies do not show whether this decreases the medicinal effects of the mushroom, there is so far no indication that this method would be any less helpful than taking supplements that have likely been processed and frozen at some point during the process.