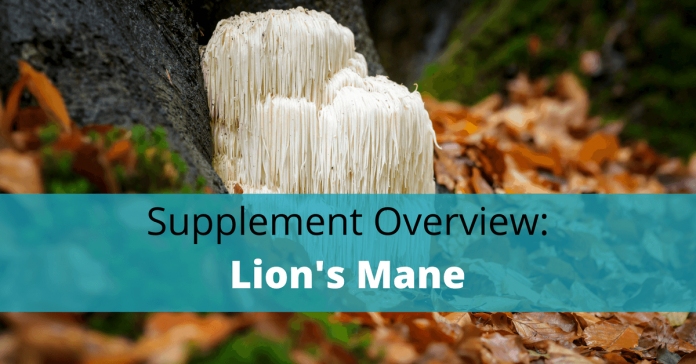 Lion’s Mane (Hericium erinaceus), are huge, white, bushy mushrooms that look like a lion’s mane as they grow, hence the name. Also known as bear’s head, sheep’s head, hedgehog mushroom, and hou tou gu or yamabushitake, it used to be reserved for the discriminating palates of royal families. Now it is fast becoming a mainstream item and drawing a lot of hype because of its incredible medicinal properties.

Found growing on dying and dead trees in China, North America, Europe, India, Korea, and Japan, Lion’s Mane is a nutritional powerhouse, with up of 20% protein. It is regarded as a gourmet dish when properly prepared, with a taste similar to shrimp and lobster. It can be consumed raw, dried or steeped as a tea. East Asian legends have it that eating Lion’s Mane can bestow ‘nerves of steel and the memory of a lion.’

This one-of-a-kind mushroom contains bioactive compounds that have potent beneficial effects on the human body, particularly the brain, heart and gut. The extracts of Lion’s Mane have in fact been utilized in over-the-counter (OTC) health supplements.

Hericium erinaceus has been the focus of many recent studies analyzing the medicinal properties of its bioactive substances, including protein-bound polysaccharides. Early clinical trials with a polysaccharide called beta glucans reveal that they possess immune boosting effect while being completely safe to consume and with minimal or zero side effects. This could be of great benefit to cancer patients because their immune systems are compromised and weakened both by their disease and anticancer treatment like chemotherapy and radiation therapy.

A huge body of research has zoomed in on this brain-boosting mushroom, and the results are short of phenomenal. Lion’s Mane has also been found to protect and promote healthy nerve cells, along with enhancing mood and concentration. One study also credited Lion’s Mane for improving cognitive function and helping in reducing anxiety and depression.

Quite an impressive list of benefits right? Now let’s take an in-depth look, particularly at those related to mental and/or neural benefits:

Bioactive compounds called erinacines and hericenones have been shown to have the ability of activating a protein peptide known as ‘nerve growth factor’ or NGF, which is crucial for the growth and survival of neurons.

These naturally occurring substances also trigger re-myelination, a process that keeps neurons healthy and maintains their ability to efficiently conduct electrical impulses. Scientists believe that Lion’s Mane’s ability to protect, cure, and regenerate nerve cells will ultimately make it useful in the treatment of neurological conditions like Alzheimer’s disease, Parkinson’s disease, senility, muscular dystrophy, among others.

In laboratory experiments, it was shown that Lion’s Mane can prevent deficits in short-term and visual recognition memory. The former refers to our ability to store a small amount of information in an active and readily accessible state for a short period of time. The latter pertains to our ability to recognize and remember past events, objects or people.

Both types of memories are lost in people suffering from Alzheimer’s and other forms of dementia. The results indicate that with further studies, Lion’s Mane can later be used to slow down or even prevent memory deficits from occurring at all.

In a double-blind, parallel-group, placebo-controlled test, the consumption of Lion’s Mane was found to improve cognitive scores among elderly Japanese subjects who were diagnosed with mild cognitive impairment (MCI). Such impairment can involve problems with language, memory, thinking, and judgment.

Neurologists consider it as an intermediate phase between the normal mental decline associated with aging and the more severe brain function deficits observed in people with dementias, like Alzheimer’s.

Lion’s Mane will make you feel good by lowering your anxiety level, reducing depression and improving your ability to concentrate. As a matter of fact, Buddhist monks have been known to drink Lion’s Mane tea before meditation in order to improve their powers of concentration.

It is said the Lion’s Mane is one of nature’s most potent brain foods because it helps in stimulating the synthesis of nerve growth factor (NGF). NGF is a neuropeptide that’s primarily involved in the growth, proliferation and survival of certain types of neurons. In other words, Lion’s Mane’s neutrophic benefits can help whether you need to study for an examination, write a thesis, or focus better at work.

Over the counter prescription drugs are usually one of the first solutions for treating both conditions. However, Lion’s Mane appears to have the ability to deliver similar benefits, sans the harmful side effects of pharmaceutical medications.

In fact, its NGF-enhancing action has also been proven to support the autonomic nervous system – the one involved in the body’s fight or flight response. Specifically, Lion’s Mane has been shown to reduce anxiety and feelings of irritability, which also suggests that it can work for symptoms of depression.

Note, however, that Lion’s Mane may interact with certain OTC drugs, including anxiolytics and antidepressants, so it is important to consult your doctor before taking it as a supplement.

As was mentioned in the preceding section, Lion’s Mane is considered a powerful brain food because it has been proven to increase NGF, which is the neuropeptide required to prevent damage to neurons. What’s more remarkable is that Lion’s Mane is also capable of helping in the regeneration of damaged cells.

It has been shown to enhance ‘neurite outgrowth’ in the brain. This pertains to the growth of axons and dendrites from a neuron. (Kindly take a look at the image on the right for reference.)

This is of paramount importance in brain health research. With its ability to increase this growth, Lion’s Mane could potentially slow or reverse neural degeneration in the brain, which is the hallmark of diseases like Alzheimer’s and Parkinson’s.

When scientists analyze how brain disorders can be affected by certain medications or treatment protocols, they often use the PC12cell line for testing. PC12 is a cell line derived from a rat’s adrenal glands. Lion’s Mane and its extracts appear to have a significant effect on PC12 cells, protecting them from damage and delaying their death. This discovery may eventually prove to be extremely relevant when it comes to the prevention or treatment of brain conditions.

In animal research, Lion’s Mane stimulates cognitive function and improves memory in mice, both with and without an Alzheimer’s model. Several studies have also documented an inverse correlation between Alzheimer’s-related symptoms and Lion’s Mane. This means that after taking the mushroom extract, the symptoms of the rats improved.

In humans, an improvement of mild cognitive impairment was noted in studies after 8-16 weeks of supplementation with 3 grams of powdered Lion’s Mane. However, such improvement did not last after the subjects ceased taking the supplement.

The risk of ischemic injury (i.e. damage caused by the lack of blood flow) to neurons is also of significant value when discussing brain damage and disease. In lab tests done in Taiwan, Lion’s Mane was shown to help in preventing this type of injury. Another noteworthy result is that Lion’s Mane prevented damage to neurons caused by amyloid-beta plaques that accumulate in the brain of people with Alzheimer’s.

While the body of research is still in its early stages and has not advanced to large-scale human testing in most cases, it is evident that Lion’s Mane has a consistent beneficial effect on the brain and has huge potential in helping with the treatment of neuro-degenerative disorders.