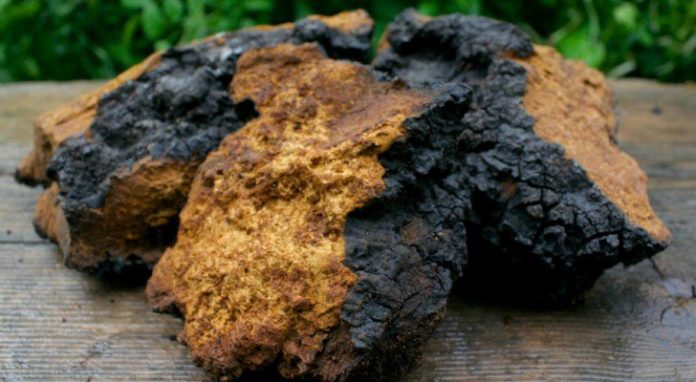 Thousands of years ago, when much of the world relied on concepts from Traditional Chinese Medicine, Chaga mushrooms were discovered as a way to end many ailments. In mountainous Siberia, the Khanty people would drink tea made from this mushroom, called “The Mushroom of immortality,” every day. The tea was thought to improve digestion and to detoxify the body. They also inhaled it and smoked it to support lung health, and they made topical forms of it for the skin, using Chaga soap to cleanse wounds. Its name originates from the Russian word mushroom, czaga, but as its popularly spread throughout the world, its name began to reflect the thoughts of those who used it.

For example, in Norway, Chaga is called kreftkjuke, which means “cancer polypore.” This name reflects its alleged abilities to treat cancer similarly to chemotherapy. For thousands of years, the mushroom’s benefits spread from Russia to Korea, Europe, the United States and even Canada. Because it thrives in cold climates, it is often found in mountainous regions with mature birch trees. It was often called “The Gift of God,” because of its helpful effects on many detrimental illnesses.

In its early days, the mushroom was known as the king of medicinal mushrooms, used to support life-energy balance, increase longevity and support the immune system. Hunters and gatherers used it to regulate their hunger and improve concentration and stamina. Even in its ancient beginnings, it was known to support immunity. Because we have evidence of its widespread use across the globe, it is difficult to pinpoint just exactly where the Chaga mushroom originated.

The oldest “in tact” human, Otzi the Iceman, is thought to have carried Chaga mushrooms in his leather pouch, although this has yet to be confirmed. Because Otzi is 5300 years old, it is highly probable that he used this mushroom for ailments. Documents from 100 B.C. seem to indicate the mushroom was not a new discovery during their time. Much later in history, in the 12th century, manuscripts suggest that the Russian ruler, Tsar Vladimir Monamah, used this for an ailment now thought to be cancer.

What Chaga Mushroom Does for You

Chaga mushrooms can slow the effects of aging, and many claims state that the mushroom can protect DNA from damage. It is widely believed that Chaga mushrooms have anticancerous effects and can kill off tumors or slow their growth.

This mushroom is also known to give people a better sense well-beinging and increase longevity. Of course, much like it was used in ancient times, it is still a great remedy for topical application on wounds or rashes, and tea is still promoted as a way to boost the immune system. Some even still smoke Chaga mushrooms for these effects. It is still used to treat digestive distress and ulcers, and recent claims state that it could be effective for treating tuberculosis.

Chaga mushrooms can also boost metabolism, assist with diabetes control and treat kidney stones. It is also commonly used to fight inflammation in those who have injuries, or illnesses such as arthritis. As an added bonus, the mushroom is a good source of Vitamin D, which has also been shown to help with fatigue, inflammation and poor immunity.

The effectiveness of Chaga mushrooms is known largely through observing the general population’s use, as no clinical scientific studies have been able to prove whether or not the mushroom can prevent illness and disease. Traditional legends, as well as personal testimonies, insist that the Chaga mushroom can prevent the onset of contracted illnesses, assist with healing cancer patients and even prevent cancer in those prone to the disease.

The Memorial Sloan Kettering Cancer Center in New York claimed as recently as 2011 that the mushroom demonstrated anti-cancer properties when administered to mice, although they still cautioned against human consumption due to lack of scientific evidence for safety.

A more daring stance was taken by author Alexander Solzhenitsyn, author of “The Cancer Ward.” After the book’s release, some in the medical profession began to further investigate Chaga mushrooms and their effect on cancer. One such observation found that peasants in Russia who brewed the Chaga mushrooms, in place of more expensive coffee, seem to have much lower occurrences of cancer than their wealthier neighbors who brewed coffee instead.

At disabled-world.com, further medical research is discussed about a medical research team that found the birch tree forests in Siberia contain less pathogens than an operating room in modern day medicine. This is said to be blamed on the anti-microbial substances found in the bark of the trees hosting Chaga mushrooms. Perhaps most fascinating is the betulinic acid that have been shown to kill cancer cells without adverse side effects. These findings, however, have yet to be clinically verified.

Because Chaga is available in many forms, it is still advised that you consider the manufacturers’ recommendations for dosage based on the product. It is important, however, not to overindulge in this very potent supplement. With this in mind, dosages should vary based on weight. For example, when taking an extract, those weighing 150 pounds should consider a dosage of 45 drops normal, while those under 150 pounds should calculate their dosage based on their weight. For example, if someone weighed 100 pounds, they would need to only consume two thirds of the dosage, meaning the normal dose should be around 30 drops.

If nausea, headaches or other unusual symptoms present themselves, it is recommended to lower the dosage. Because the extracts are water soluble, one has very little reason to worry with overdose, as excess will simply be expelled from the body as waste.

Extracts can be placed in water, but warm water could neutralize some of the benefits, so it is best to use cold water. It is recommended to swish in the mouth for up to 60 seconds before swallowing. To prevent possible insomnia, try not to consume Chaga after 4 p.m., or when you would normally cut off caffeine for the day.

Teas, powders and capsules should all be consumed with manufacturers’ recommendation and the weight rule in mind, especially if you are trying the supplement for the first time. It is better to start with a smaller dose and increase to a comfortable dose than to experience unpleasant side effects from its potency.